Mirza Asadullah Khan Ghalib, is one of the most celebrated Indian poets of classical Urdu and Persian. Mirza Ghalib, undoubtedly is one of the most esteemed literary personalities during the British colonial era. Also known as Ghalib, Dabir-ul-Mulk and Najm-ud-Daula, the legendary poet is considered as one of the most influential Urdu poets from the Sub-continent. He is not only celebrated in India and Pakistan, but rather in literary communities worldwide.

Let us take you through the beautiful journey of Mirza Ghalib biography from a poetic perspective. 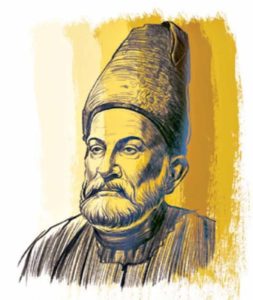 From the small age of 11, Mirza Ghalib began penning down poems in Urdu and Persian, which were taught and spoken at home, along with Turkish language. He began his early education in Arabic and Persian, and later, in his early teenage, a highly educated Iranian tourist and Zaroastrian, Abdus Samad, taught him Logic, Philosophy, Arabic and Persian.

Despite being extremely proud of his Persian achievements in poetry, Ghalib is largely remembered for his Urdu ghazals and poems. A large number of Urdu scholars have written and compiled the ghazals and poetry written by Mirza Ghalib, the revolutionary poet of South Asia.

He was also remembered as a revolutionary poet who remodeled ghazals and presented them beyond the predisposed notions of anguish and love. Ghalib presented the mysteries of life, philosophies and travails in his ghazals, hence, widening the horizons of Urdu poetry and literature.

Despite his unconventional personality, Ghalib always kept up with the conventional rules of classical ghazals writing by shrouding the identity and gender of the lover with clever mastery.

According to an influential poet and critic, Shamsur Rahman Faruqi, this indeterminate identity allowed Ghalib’s ghazals to free his protagonist lover from the constraints of realism, allowing him to adore the idea of a beloved without being forced into a confined image of the lover.

Needless to say, this made Urdu poetry travel away from the idea of love poems, creating an exciting dimension to explore both, spiritual and worldly desires.

Sarfaraz K. Niazi was the first to provide a complete English translation of Ghalib’s works, which came to be known as the Love Sonnets of Ghalib.

When exploring Mirza Ghalib biography, one is intrigued by Ghalib’s desire to portray his inner mental and poetic state through his constantly changing pen-names, or Takhallus, as Urdu poets refer it. His very first Takhallus was Asad, taken from his name, Asadullah Khan, but at a later point in his early poetic career, he decided to take up the Takhallus Ghalib, which means superior, powerful, conqueror and the excellent.

According to the legend, it is said that the he adopted the Takhallus of Ghalib after he came across a horribly displeasing couplet written by a poet who also wrote by the pen name Asad. Upon hearing the couplet, Ghalib became rueful, and declared,

“Whoever authored this couplet does indeed deserve the Lord’s mercy (for having composed such a deplorable specimen of Urdu poetry). If I use the takhallus Asad, then surely (people will mistake this couplet to be mine and) there will be much curse on me!”

And hence, he changed his Takhallus to Ghalib. However, most commentators and scholars who have studied Ghalib’s work regard this legend as a made-up figment of someone’s imagination, since Ghalib appears to have used both his pen names quite frequently and interchangeably throughout his poetic career, and one cannot really determine if he preferred one over the other or not.

Ghalib’s ghazals and poetic work can be regarded as the perfect chronicle to understand the one of the most turbulent periods in the history of the subcontinent, the demise and decline of the Mughal Empire.

Ghalib was there to see all the grand mohallas, katras and Bazaars of his time vanish into nothingness, while the grand havelis and mahals where people would get together to listen to his recent works had all been razed into the very ground.

Ghalib had not only documented the life in the glorious days of Delhi, but he was also there to witness Delhi turn into a dessert with scarce water and a decline of the feudal elite under who’s patronage Ghalib had flourished for years.

Ghalib describes that Delhi as a “military camp”, saying,

An ocean of blood churns around me-

Alas! Were these all!

The future will show

What more remains for me to see.

Mirza Ghalib’s biography brings to light a plethora of beautifully and artfully prosed letter, which shed enormous light on his ability to write such intricately worded letters. Needless to say, his letters have laid the foundation for what is now regarded as the popular and easiest form of speaking Urdu.

Before Ghalib’s letters surfaced, Urdu letter writing was dull and flavorless. But Ghalib’s words and sentence structuring would really bring the letters to life, as if they were holding a captivating conversation that has immersed the reader.

Ghalib’s letters were extremely informal, and work wonders at depicting the humorous side of his personality. His letters were not only hilarious but also very interesting to read. He once remarked,

This means, I want to write the lines that whoever reads those should enjoy it.

Today, after hundreds of years passed, we remember Mirza Asadullah Khan Ghalib for his great writing style. Whether it is a letter, poem or a single couplet, Ghalib’s words have no match.

He reported to have said at an occasion,

This loosely translates as: From hundreds of miles talk with the tongue of the pen and enjoy the joy of meeting even when you are separated.

Hopefully, you enjoyed Mirza Ghalib Biography in English and got to know lots of new aspects of the life of Mirza Asadullah Khan Ghalib.

ABOUT US
PoemsUrdu.com provides you with all your literary interests that includes Urdu poetry, lyrics, poems, naats, national songs and more. Find poetry from all prominent poets, famous naat and milli naghmay lyrics and more stuff.
FOLLOW US
Copyright © PoemsUrdu.com 2022 - All Rights Reserved.
Shares